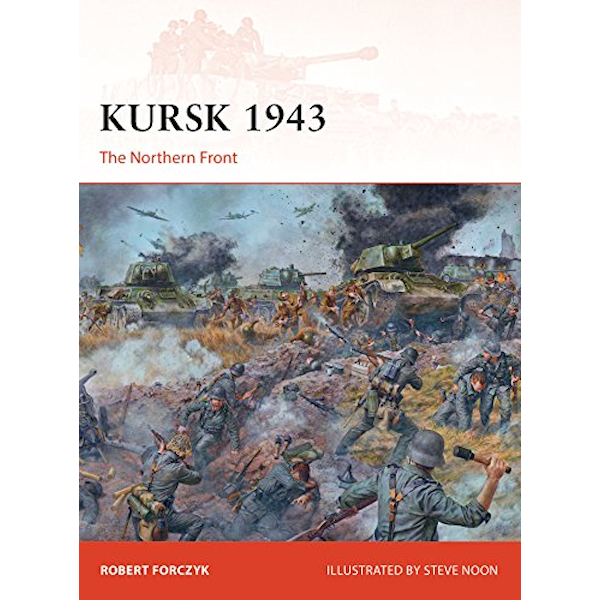 I bought this book because it covers the northern face of the Kursk salient, while most books on the battle focus almost exclusively on the southern face. As mentioned by other reviewers, the book also covers the Soviet's Operation Kutuzov, which liberated Orel.

With the exception of a few minor issues noted below, this is a very good book--the writing is clear and concise, and the author is admirably even-handed. The coverage of the Kursk part of the battle is reasonably detailed. The book also includes numerous photos (from both sides), which are often accompanied by helpful/thoughtful captions. The maps are also rather good.

The Kindle version does not seem to include the "real page numbers" feature, but in terms of percentages, the first 44% of the book is dedicated to the background/opposing forces/commanders, etc., 34% of the book deals with the Kursk battle, 15% deals with Operation Kutuzov, and the rest deals with the aftermath, the battlefield today, etc. Note that this book is rather brief (96 pages according to Amazon), and that much of that is occupied by photos/maps/art, so there is relatively little text.

A note about the Kindle version: obviously, if you're reading this book on an actual Kindle device, you'll not get much out of maps/artwork. I read the book via the Kindle app on my iPad and was generally pleased--while not as good as reading a hard copy, this book allowed me to zoom in to examine maps/art much more than other Kindle books that I've seen.

Given my high opinion of the book, why not 5 stars? Good question, so I thought I'd provided specific reasons so that you can judge for yourself:
--The book has no footnotes, which for me is a serious drawback for any historical work; others might not care.
--While the book seems well-researched, in addition to the lack of footnotes, there is no bibliography per se (only a "Further Reading" list consisting of ten books).
--I found the coverage of Operation Kutuzov rather thin--despite the fact that this offensive lasted from 12 July to 18 August and involved three fronts, it received less than half the "page count" as the Kursk part of the book, which only lasted from 5-11 July. Generally this operation is covered only in broad brushstrokes.
--Finally, while the writing is clear and concise, and the coverage of the Kursk battle includes mention of at least some battlefield incidents, etc., I found that the lack of direct quotes from participants gave the text a slightly clinical feel. This is not to suggest that the text is boring (it is not) or as dry as, say, a Glantz book (again, it is not), but it does lack a certain "you are there" feeling.

Confronting Case Blue: Briansk Front's Attempt To Derail The German Drive To The Caucasus, July 1942
The Bloody Triangle: The Defeat of Soviet Armor in the Ukraine, June 1941
Panzer Commander: The Memoirs of Hans von Luck
Tigers in the Mud
Iron Cross Brigade - The Story of Werner Gösel and Sturmgeschütz-Abteilung 244
Armor and Blood: The Battle of Kursk: The Turning Point of World War II
Tags:Kursk, Tanks